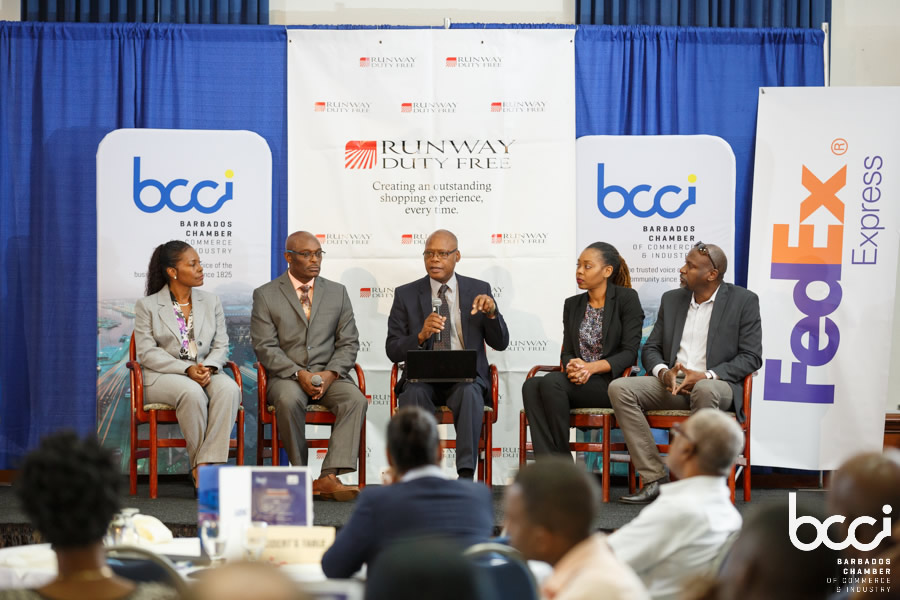 With ASYCUDA World, Customs is "coming"

I’ve said before in this space that Trisha Tannis, the CEO of Courts operations in Barbados, has been a breath of fresh air (or something like that) since she took up the post of president of the BCCI recently.

The exact words are neither here nor there - the sentiment was that she has brought a direct representation and therefore a new life force to the chamber which to me was in danger of succumbing to the effects of extreme age, being about 5,000 years old.

But age to an organisation is really just a number, because it is what the current leadership does that defines what its influence is going to be, and the BCCI had fallen into a state of advanced gentility, if you will (surely you know diplomacy is my strong suit).

Last week, Ms. Tannis continued her powerful representation at the chamber’s monthly luncheon, speaking truth to power without being rude or in-your-face.

What, I asked myself in the days leading up to the luncheon, could be more boring than listening to business people talk with customs officials about import procedures, tariff rates and security? But the two presentations, the welcoming remarks by Ms. Tannis and the feature address by new Comptroller of Customs Owen Holder, provided a fairly full picture of life at the sea port these days.

It has not been “days of wine and roses” of late, noted the former. “It’s getting better all the time,” suggested the latter. (Just in case you needed to know, those are not actual quotes, but song titles.)

The culprit for all the apparent chaos has been the new software system called ASYCUDA world, which is a major upgrade to the previous one, ASYCUDA ++. The importers have been incurring port charges because they couldn’t get their goods through the system in a timely manner. Demurrage costs are also a problem because the ships which brought in the goods have also had to wait longer in port before being able to offload them.

So the good news of sorts reported by Ms. Tannis was that Barbados Port Inc. will be waiving port storage fees on a case-by-case basis going back to Aug 24 “where such fees have been occasioned by the Asycuda World software transition.”

She added that negotiations on demurrage - which according to my online dictionary (yes, I had to look it up) are “charges payable to the owner of a chartered ship in respect of failure to load or discharge the ship within the time agreed” - will also be led by the Chamber in collaboration with the Bridgetown Port. How those charges might be resolved was not explained.

This is really important because if the costs incurred by importers due to the debacle in launching the new system are not refunded or credited back or otherwise removed, they will be passed on to consumers, giving an artificial bounce to the prices of many items which would probably be noticed right away by consumers. That would be a big problem for the Mottley administration, and when prices go up on products it is not often they go back down.

But really, was it so bad? Well, said the BCCI president, while the benefits of the new system were what she termed “obvious”, the implementation of ASYCUDA World in Barbados over the past month had been “nothing less than extremely disruptive to the business sector of this country.”

In the chamber president’s view, “A far more robust change management plan was needed” and “a parallel implementation could have been considered. By that she meant one “that would have allowed the teething challenges to be identified whilst not creating a backlog of unprocessed containers at the sea port.”

On a positive note, Ms. Tannis noted that customs has established a call centre and a help desk to further assist during the transition, and Barbados Port Inc. would assist the Customs Department in troubleshooting.

Somehow I got the impression that this was a salvo to the featured speaker, who had to follow where most angels would have feared to tread. But the new Customs Department boss seems to be accustomed to such criticisms, apparently having established the same system in other countries (they didn’t say which ones). His address was really a Power Point run through of all the things you could do in a perfect ASYCUDA World.

I found Mr. Holder’s speech unnerving, I must say, because after highlighting all of the principles that would be followed to do with integirty, best practice and treating customers as valued stakeholders, Mr. Holder let it be known that the new software system will also give the customs department a much fuller view of all that transpires relating to imports.

The customs chief told his audience that “We will be doing monitoring at a level you have not yet seen.”

This, of course, means that there should be less “revenue loss” to the Treasury if instances of corruption or malfeasance can be tracked and proven in court. I am all for that: But doesn’t it also mean far more government intrusion in all of our lives than maybe we are accustomed to? It certainly does.

He said he had created what he called a “cargo management inventory unit” whose job will be to follow imports at every stage through to consumption. This was necessary, he said, because there was a revenue loss to government when a company passes on a waiver or an exemption it had received to amother (perhaps affiliated) company; as well as through charities and other entities with exemptions, and any companies or organisations found to be in breach of the law. They will be subject to a serious inquiry, he said, adding (in my view, ominously), “We are coming and when we come we will expect you will be above the table, otherwise we will have to have another discussion.”

Seems like in ASYCUDA World we are all going to become “persons of interest".