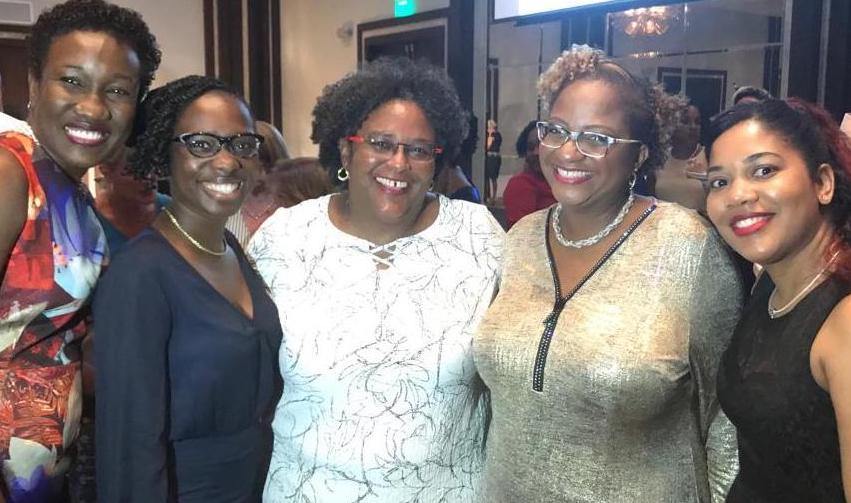 In photo above, Prime Minister Mia Mottley with Cidel staffers and, at right, with  Promotech CEO Kailash Pardasani, both at their company's recent 20th anniversary events.

I was standing on the northwestern side of the Bussa Roundabout in the early hours of May 25 last year waiting on my ride home. It had rained and there was almost nobody about.

Listening to the radio via my iPhone I heard Freundel Stuart make his concession speech. In another country, perhaps (and this is not judging either way) the proximity of a statue celebrating freedom to the residence of the highest political office in the land might have been the venue for supporters of a winning party to rally into the wee hours.

Not so in this level-headed island called Barbados.

The voters had said what they had to say and although it would tally up to be a historic record breaker in terms of numbers of votes cast and the complete shutting out from elected office of one party they were in their homes and either sleeping or taking in the denouement of the evening’s dramatic events.

Within a few days the new prime minister had bitten the bullet and we have followed an IMF playbook.  It took immense courage for Ms. Mottley to do that, and I believe a similar effort could have been made by the Stuart government, but then we probably wouldn’t have such romantic names for ministries as we do in “MIST” and “Blue Economy”.

Why the former administration did not go the IMF route perhaps has more to do with hubris and other factors, and the fact that Ms. Mottley has done it speaks volumes for her legacy as a political leader.

I caught echoes of this in the new prime minister’s own words the other day when two weeks ago she told an audience at the Sandiford Centre that she had “surrendered” her role as a politician when she took on the responsibility of leading Barbados out of the worst crisis of its modern history, and she would not allow politics to “constrain” her from doing sometimes unpopular things in order to keep the country on the right track. When she said “We must all move out of our comfort zones in order to move forward,” I had the feeling she was referring first to herself and then to the rest of us.

I don’t think Barbados, despite it remaining in the economic ICU today, would have stabilized as much as it has were it not for this sense of mission. We have taken for granted a smiling “Mia” hugging probably every man, woman and child alive in this country to date, giving each that special look of sincerity and encouragement which every one demands of her. People of all ages and walks of life line up for that embrace, that smile. Where does it come from?

At the beginning of the most historic year of her life, Ms. Mottley told her audience at the BCCI luncheon in early 2018 that this would be the last time she was addressing them - one way or the other - as leader of the opposition. And then she had little to say because she had said it all before so many times. The sand in the hourglass was running out as the then administration seemed to believe the longer they waited the more chance they had of regaining office. Or was it the other way round and they were, you know, just trying to leave all loose ends tied up? (Cough.)

Today, a year on from the most consequential decision of modern elections in Barbados, we have stepped back from the brink, but could just as easily step forward again. This cannot be an easy road for any leader to travel, but Mia Mottley has become the embodiment of our hopes and dreams as a country, and remains Barbados’ guiding light through the most perilous economic waters.